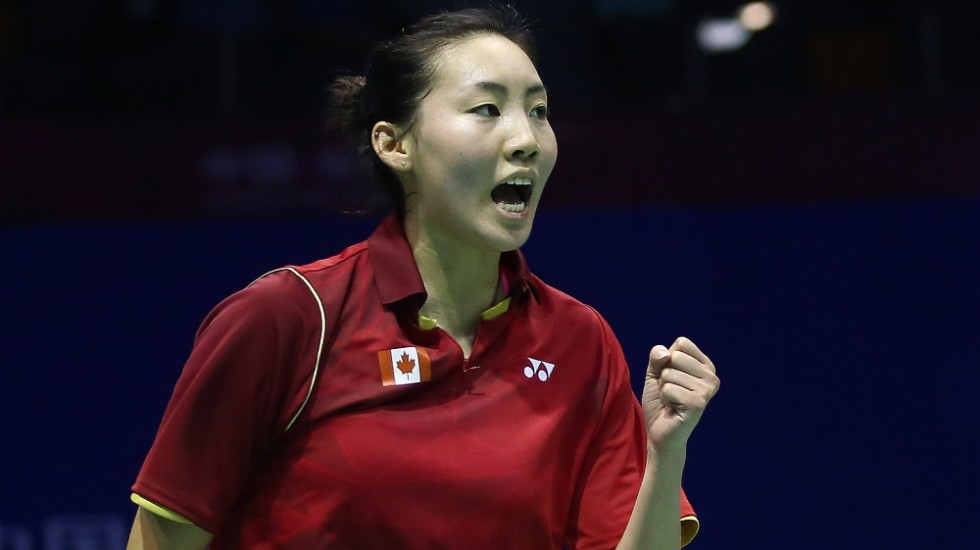 They weren’t in Group 1 but Michelle Li and Carolina Marin’s Group 2 late-night blockbuster proved the match of the tournament in the recent Vivo BWF Sudirman Cup.

The Commonwealth Games champion versus the World champion – going right down to the wire in three pulsating games – showed that top-class competition isn’t just to be found in the top tier of the World Mixed Team Championships. Li’s (featured image) upset of World champion Marin from the brink of defeat in sub-group 2A highlighted the quality of action in the lower groups. Li saved five match points against Marin to win 12-21 27-25 24-22 and helped spark a Canadian resistance from 0-2 down. Despite having Li to lead them, however, Canada finished bottom of the sub-group and seventh in Group 2 (overall 19th). The event was a great opportunity for lesser-known players to share the stage with stars and showcase their skills in front of an appreciative crowd. Players like Misha Zilberman (Israel), Ygor Coelho de Oliveira (Brazil), Soraya De Visch Eijbergen (Netherlands; left), Ramazan Ozturk (Turkey) and Jacob Maliekal (South Africa), among others, battled to impressive victories, showing toughness under pressure and winning the hearts of fans.

The fight for places in the groups were close affairs. Hong Kong and Netherlands faced off for the top spot in Group 2; Hong Kong emerged winners with some difficulty. The Dutch world No.9 pair of Selena Piek/Eefje Muskens were favourites to take the Women’s Doubles over Poon Lok Yan/Tse Ying Suet, but the Hong Kong duo overcame two match points to win in three tight games and help Hong Kong top Group 2 and rank 13th overall.

In the same group, France prevailed over Singapore in a thriller to finish at No.3. The French saw their 2-0 lead neutralised but Emilie Lefel and Anne Tran rescued them in the final Women’s Doubles match over Elaine Chua/Vanessa Neo.

Vietnam were comfortable Group 3 winners. With all-win records in their sub-groups, Vietnam and Czech Republic faced off; the Czechs could only take a game in three matches as Vietnam swept past them 3-0. The most exciting tie in this group was between the second-placed teams of 3A and 3B, Austria and Australia. Austria appeared to have taken a decisive 2-0 lead by winning the two singles, but Australia fought back on the strength of their doubles. In the final Mixed Doubles, Robin Middleton and Leanne Choo (above) were narrow winners over Matthias Almer/Elisabeth Baldauf, 21-12 15-21 21-18, helping Australia grab third place in the group and 23rd place overall. Group 1 action was expectedly dominated by China, who defended the title without being even remotely threatened. It meant a decade of dominance by China in this format; the last time they lost the trophy was in 2003 to Korea.

Of the other teams in Group 1, runners-up Japan were the most impressive, even if they unduly struggled against under-strength Denmark in the quarter-finals. Korea made the semi-finals but the capitulation of Mixed Doubles pair Ko Sung Hyun/Kim Ha Na to Malaysia and Japan signified that the Asian powerhouse have severe problems in this department.

Malaysia were the surprise package of the tournament. With singles spearhead Lee Chong Wei returning to international duty after an eight-month layoff, he was expected to be rusty but he dispelled all doubts, beating the likes of Srikanth Kidambi (India) and Son Wan Ho (Korea) with surprising ease. Lee’s resurgence seemed to inspire the rest of the team, as Goh V Shem/Tan Wee Kiong authored a sensational upset of Lee Yong Dae/Yoo Yeon Seong (Korea) in their opening group match. Malaysia however could not repeat their sub-group upset of Korea in the quarter-finals.

Former champions Indonesia’s troubles in singles were too stark, and they were unable to mount a serious threat to China in the semi-finals.

On the organisational front, the event set a high standard. Full-house crowds cheered the combatants on all through the week. The excitement of on-court action was complemented by colourful entertainment court-side (below). Fans will now look forward to the next edition of the tournament in Gold Coast, Australia.