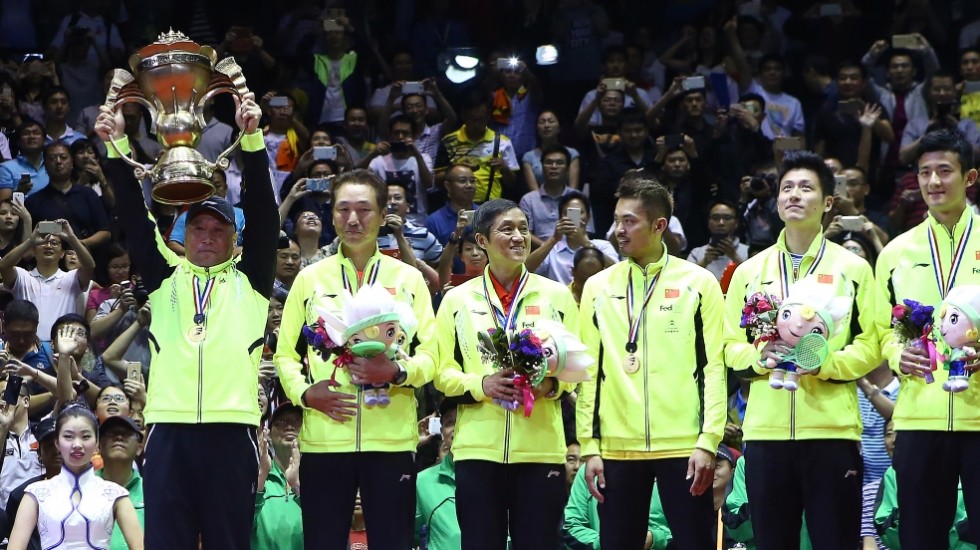 The title, China’s sixth in a row, was won when crowd favourite Lin Dan whipped a smash past Takuma Ueda to give the home team an unassailable 3-0 lead. China’s victorious campaign was achieved with the loss of only one match in the tournament.

Their stiffest test for China today was in the opening Men’s Doubles. Zhang Nan and Fu Haifeng were dominant overall but had to contend with some stubborn resistance from Kenichi Hayakawa and Hiroyuki Endo. The Japanese were undone by five service faults by Hayakawa but despite that, did well to overcome their frustration and take the contest to a third game. The Japanese staged a mini-recovery from 4-10 down to 9-11, but Hayakawa was service-faulted again. Eventually, it was superior firepower that did them in, with Fu Haifeng consistently puncturing their defences with his big smashes. The 21-17 20-22 21-17 victory took them 79 minutes.

Akane Yamaguchi started spectacularly against Li Xuerui (below) in the Women’s Singles. The World Junior champion had Li in trouble with her fierce smashes and court coverage, but Li edged through the first with fine touch at the net. Yamaguchi’s challenge fell apart in the second with Li getting to grips with her game and forcing her to run the long diagonals. Yamaguchi was bereft of ideas by the end as she went down 23-21 21-14.

Just as he had yesterday in the semi-finals, Takuma Ueda threw everything into his match against Lin Dan. Faced with an opponent who seemed to be in the right spot all the time, Ueda was required to play some extraordinary shots to win points; for the most part, however, his best shots were returned. Lin (right) conjured winners out of seemingly innocuous situations; the 21-15 21-13 result was achieved in 49 minutes.

Japan (bottom) chief coach Park Joo Bong conceded that he was happy with his team’s performance despite the loss.

“Our target was the semi-finals. We are happy although we lost to China. Our Men’s Singles player Kento Momota was injured and so it was difficult. If we had won the first Men’s Doubles, it would have been a different situation. We’ve improved our fighting spirit. The players are very motivated. In terms of speedwork and tactics we have improved in recent times. China has always been strong but over the last two-three years we have been getting better.”

“To me, both Lin Dan and Chen Long are No.1. It’s good for us, but it’s also a headache to choose one over the other. Both wanted to play today.” “With ten days to go for the Sudirman Cup, Zhang Nan fell sick and couldn’t practice. He recovered just before the event. Tang Yuanting is a very comprehensive player; she’s good in attack and defence and can combine with anyone. She’s very young and we would like to give more opportunities to our young players. Tang has already got experience with different partners and I won’t be surprised if she wins a medal at the Rio Olympics.”