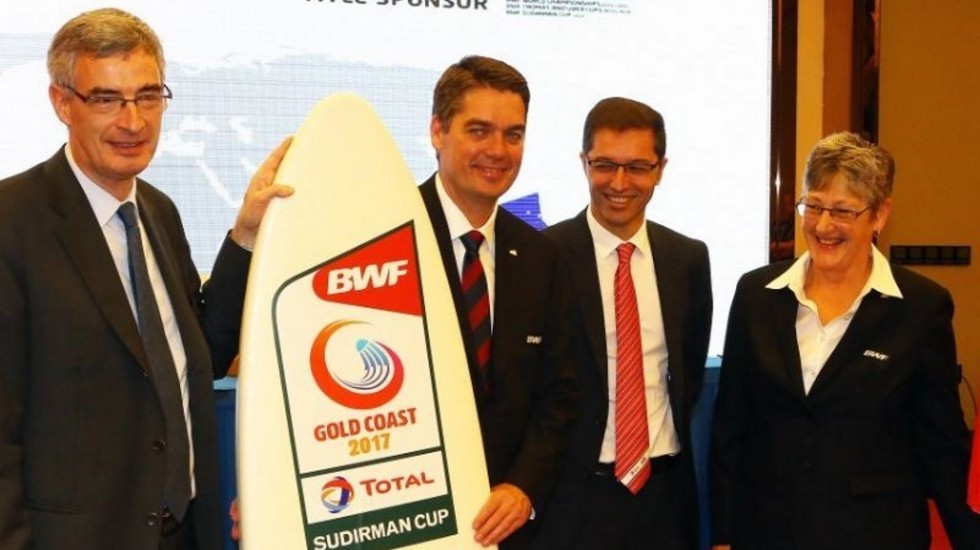 Total and BWF Partnership Revs Up

The Badminton World Federation (BWF) and energy giant, Total, today celebrated their blossoming partnership with a ceremonial signing for three of the BWF Major Events which Total will title-sponsor.

“Today is indeed a special occasion where we can unite and present various branches of our Major Events family who have a unique connection. It is my pleasure, on behalf of BWF, to welcome you – our hosts – as members of this new and fast-growing family bound together by BWF and Total,” stated BWF President Poul-Erik Høyer, at the ceremony in Dongguan, China. Acknowledging the first tournament under this multi-million-dollar partnership – the TOTAL BWF World Championships this August in Jakarta – he underlined the benefit of combining great sponsors with great hosts.

“BWF is excited about the journey ahead with Total as our Major Events title sponsor, supporting some of badminton’s most prestigious tournaments, showcasing our elite players and some of the best action in our sport – and helping us take badminton further and higher.”

“Blend with that, host cities from three different BWF confederations that are eager and clearly competent to stage these sporting spectacles – and it’s win-win all around. As the owner of these events, BWF could not have asked for a better partnership and we look forward to working with Total and all of our hosts for the betterment of badminton.”

Meanwhile, Total Marketing & Services Asia Pacific, Specialties Vice President, Stéphane Lagrue said: “We are very pleased to be the first global energy company to partner with BWF to promote badminton. Total is committed to delivering outstanding performance and endurance in car engines with TOTAL QUARTZ automotive lubricants and this has given Total global prominence in motorsports.

“On behalf of my colleagues in China and the rest in Asia Pacific, we are very proud to be partnering with the BWF and badminton at the elite level; a sport which shares our core values – athletic endurance and high performance – and possesses similar positive energy. Around 80% of Olympic badminton medallists are from Asia Pacific, a region where Total is committed to growing our presence through this highly visible and accessible sport.” Total in China and Chairman of Total (China) Investment, elaborated further: “The BWF Major Events epitomizes the pinnacle of international badminton, with strong public interest particularly from China, whose national players rank amongst the top in the world.

“Applying the same high standards in our business world, Total is committed to providing safer, cleaner, more efficient, more innovative and more accessible energy to China’s society. In such way, we are a partner of choice to our clients and customers, and we are also pleased to be the partner of choice for BWF.”

Mr Sun Lieping, Deputy Director of Kunshan Sport Bureau, hosts of the next BWF Major Event in China – TOTAL BWF Thomas & Uber Cup Finals 2016, said: “While China has played host to many top-level international badminton tournaments, it is the first time that the city of Kunshan will be hosting a prestigious badminton tournament. We are excited to be the host of the Thomas & Uber Cup Finals and will spare no effort to organise a successful tournament.”

“We have a great track record in Scotland of staging major badminton events thanks to our strong and enduring relationship with Glasgow City Council, EventScotland, UK Sport and our other key partners.

“But on top of that we have the perfect venue in the Emirates Arena to do justice to a World Championships. The Arena has already hosted two Scottish Open Grand Prix events and attracted capacity crowds to the badminton at the 2014 Commonwealth Games,” she noted.

“We intend to make the 2017 TOTAL BWF World Championships a magical experience for the players, officials and badminton fans who will be coming to Glasgow from all over the world, just as we did in 1997 and 2007.”

Meanwhile CEO of Badminton Australia Paul Brettell said his organisation “is delighted to have been charged with the responsibility of hosting the BWF Sudirman Cup in 2017”.

“The Gold Coast is a superb environment and our partnership with the Queensland Government will result in an outstanding event. We look forward to extending a warm welcome to all players, officials and friends of badminton in 2017.”

The Badminton World Federation (BWF) has its headquarters in Kuala Lumpur, Malaysia, with 182 members associations worldwide.

Total is one of the largest integrated oil and gas companies in the world, with activities in more than 130 countries. Its close to 100,000 employees put their expertise to work in every part of the industry – exploration and production of oil and natural gas, refining and marketing, new energies particularly solar industry, trading, and chemicals. Total is working to help satisfy the global demand for energy, both today and tomorrow.

About TOTAL in Asia-Pacific

The Marketing and Services branch for Asia-Pacific is headquartered in Singapore. Employing over 4,000 employees spread across 20 countries, our teams are driven by innovation and growth bringing to our customers a wide range of products and services including retail networks, lubricants, LPG, special fluids, aviation and transport fuels.

About Total in China

Today, Total employs nearly 4,500 people in China and owns more than 20 companies locally through its activities of Exploration & Production, Gas & Power, Refining & Chemicals, and Marketing & Services. The company is actively present in the entire value chain of China’s energy industry – ranging from upstream to downstream and chemicals, establish win-win partnerships by sharing technology and know-how, as well as developing business opportunities with Chinese partners both in China and globally.

Total Lubricants China (TLC) is an affiliate of the multinational integrated oil and gas company. Total Lubricants China (TLC) has entered the Chinese market for over 20 years, and has its headquarters in Shanghai. It develops its business all over Mainland China as well as in Hong Kong and Macao, through its 2 brands TOTALand ELF. Total can fully satisfy the market demand, from its three lubricants production sites and its efficient supply-chain. TLC has enjoyed rapid growth from origins and is employing in 2015 more than 550 persons.