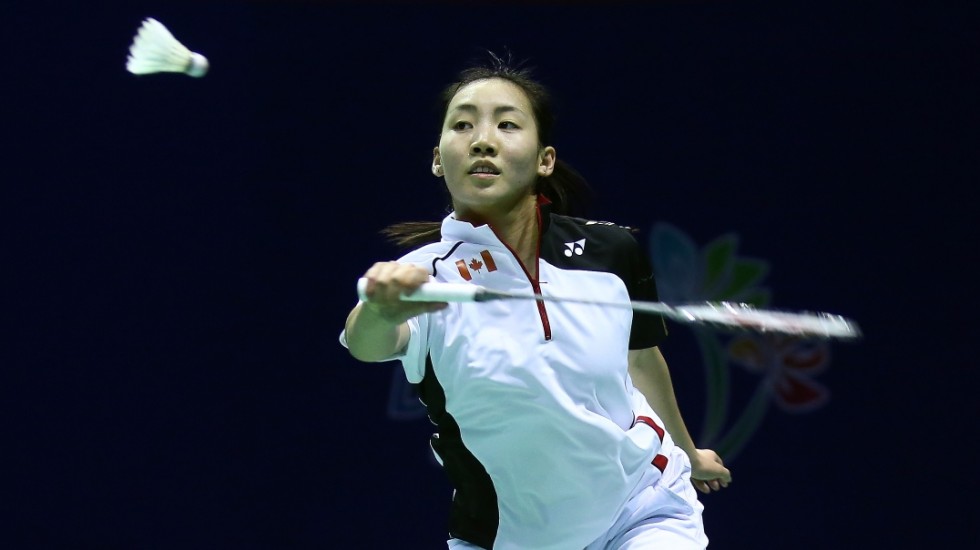 Michelle Li’s stunning upset of Carolina Marin could not prevent Canada from falling 2-3 to Spain in a sub-group 2A tie at the Vivo BWF Sudirman Cup yesterday.

Spain thus eked out its first victory to come third in the sub-group. Netherlands topped the sub-group with an impressive 4-1 win over Singapore.

But the match of the day was the Commonwealth Games champion Li against World champion Carolina Marin. Spain had taken the lead thanks to Ernesto Velazquez/Beatriz Corrales in Mixed Doubles over Toby Ng/Alex Bruce, followed by Pablo Abian’s three-game win over Derek Wong in Men’s Singles. Through the early part of the match, Li (featured image) looked overwhelmed by Marin (left). The World champion appeared too quick and powerful for the Canadian, who was deflated and moved with leaden feet. From 13-16 down, however, Li suddenly switched to another level, moving fast and smashing hard to get on level terms. From there it was a bitter contest, with both players throwing themselves around to extend the rallies. Li looked to have blown an opportunity when she served long at 19-18, but she kept her composure and stayed in the match. She saved three match points before converting her fourth to take the match to a decider.

The last game continued in the same vein; Marin had two more opportunities to close out the match but Li was exceptional under pressure, finally converting her second match point for a memorable victory: 12-21 27-25 24-22 in 79 minutes.

“This has to be one of my best performances, after my Commonwealth Games victory,” said Li.

“I’m happy I could play at this level and beat the World champion.”

With Adrian Liu/Derrick Ng storming past Luis Enrique Penalver/Ernesto Velazquez in Men’s Doubles, Canada appeared in sight of a stunning turnaround. However, Marin returned with Beatriz Corrales and held off Alex Bruce/Phyllis Chan 17-21 21-17 21-13 to ensure victory for Spain.

Meanwhile, Netherlands were surprise 4-1 victors over Singapore for their third successive win in the sub-group. The turning point was in the second match when Soraya De Visch Eijbergen (above) saved three match points to thwart Chen Jiayuan in Women’s Singles: 17-21 25-23 21-12. Although Derek Wong made it 1-2 by beating Mark Caljouw, Netherlands’ strength in doubles proved far too much for Singapore.

Czech Republic topped the sub-group with their third straight win, over Turkey, after recovering twice from deficits. Jan Frohlich and Ludik Milan erased a 1-2 deficit in Men’s Doubles over Emre Vural/Sinan Zorlu (14-21 21-18 21-15) before Alzbeta Basova/Jakub Bitman clinched the tie in dramatic circumstances in the Mixed Doubles, beating Ramazan Ozturk/Ozge Bayrak 25-23 26-24.

Austria had it rather easy over South Africa in the same sub-group. The tie was won after the first three matches, with Matthias Almer/David Obernosterer (Men’s Doubles), Elisabeth Baldouf (Women’s Singles) and Luka Wraber (Men’s Singles; right) ensuring an unassailable 3-0 margin.

Hong Kong were in no trouble from USA, registering their third straight 5-0 win to top the sub-group. Chan Yun Lung/Tse Ying Suet (Mixed Doubles) gave Hong Kong the lead beating Howard Shu/Eva Lee; Wong Wing Ki made it 2-0 in Men’s Singles over Sattawat Pongnairat (below) and Yip Pui Yin shut the door on USA in Women’s Singles with a 23-21 21-14 result over Jamie Subandhi. France finished second in the sub-group, ahead of USA (third) and Brazil (fourth). With the sub-group stage in Group 2 having concluded, the teams will next play the corresponding teams from sub-group 2A — Netherlands, Singapore, Spain and Canada — for overall placings.