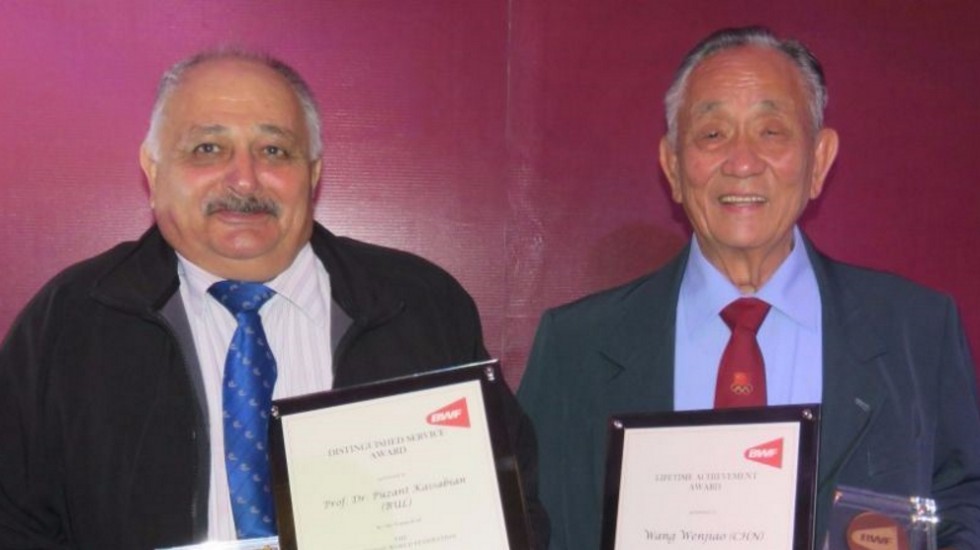 Badminton stalwarts Wang Wenjiao and Dr. Puzant Kassabian were the toast of their peers last evening in a gala ceremony ahead of the Badminton World Federation’s Annual General Meeting today in Dongguan, China.

The pair who hailed decades of friendship between them received two of the BWF’s top administrative honours for 2014, marking outstanding service to the sport. Former Chinese head coach, Wang, received the BWF’s Lifetime Achievement Award while his Bulgarian counterpart was bestowed with the Distinguished Service Award; both fittingly presented by BWF President Poul-Erik Høyer. serving and pioneering administrator who – at age 81 – is still the secretary of Badminton Victoria.

“Val is an inspiration to women in Australia because she has been involved in badminton since age 15 in many different capacities. She has created many tournaments for women only; as well as for men and women, including the Atalanta Jamboree for women; the Australasian Under-17 and the Australia Under-15,” said Brown of this year’s winner who sent a video message thanking BWF for her honour.

Meanwhile, 82-year-old Wang Wenjiao was thrilled to be saluted by his “badminton friends” as he called them, humbly noting the award was also for his colleagues who supported him and “my players who got the good results…so it’s not only for me but for Chinese badminton”.

Kassabian (right; with Høyer) with hugged Wang and chuckled, declaring “we are old friends for many decades and we looked up to him as our teacher. We got a lot of help from him and learnt many things from the Chinese”.

Thanking Badminton Europe for nominating him and BWF for conferring the honour on him, the well-known 74-year-old surveyed the banquet hall, spread his arms wide and smiled.

“This evening is great. All these people here are my family. I was in badminton when there were only 60 MAs (member associations) and I am happy to contribute to the development of badminton and to see how far badminton is going. I am proud of its development. My heart feels good.”