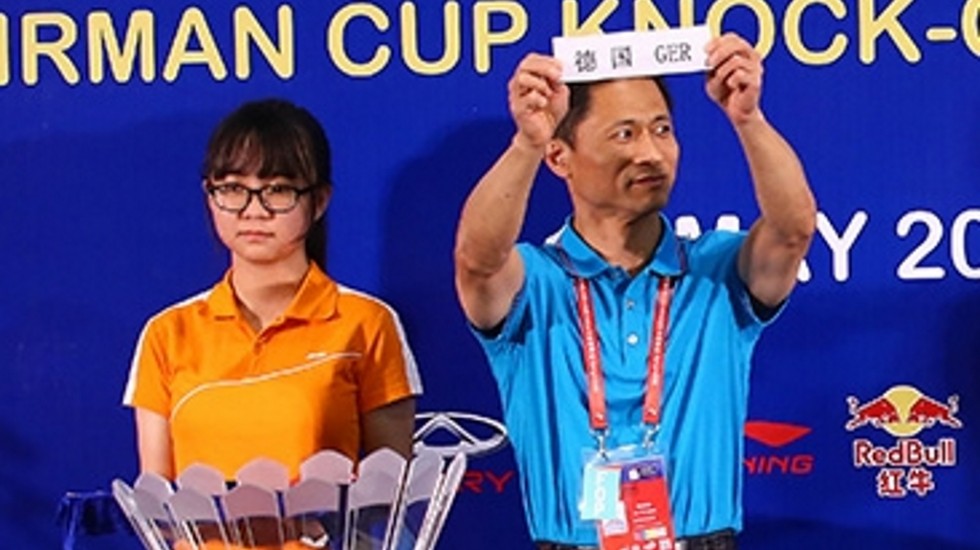 Having unexpectedly beaten Korea in the group stage, Malaysia were faced with the same difficult task in the quarter-finals of the Vivo BWF Sudirman Cup.

The draw (featured image), conducted immediately after the conclusion of Group 1 matches, saw China matched against Germany; Indonesia against Chinese Taipei; Korea against Malaysia and Denmark against Japan.

“It’s the worst we could have hoped for,” he said. “It’s tough luck. But we will fight hard once again.” Korea finished second in sub-group 1D after some trouble against India. Kim Ki Jung/Kim Sa Rang gave Korea the lead in Men’s Doubles, but Saina Nehwal levelled the deficit in Women’s Singles against Bae Yeon Ju with a hard-fought win in 68 minutes.

Parupalli Kashyap showed blistering speed to subdue Son Wan Ho (below) early in their Men’s Singles encounter, but as the match wore on he was unable to sustain the pace. Frequent errors plagued the Indian even as Son remained steady and gained the advantage for Korea, 13-21 21-14 21-13. Jwala Gutta and Ashwini Ponnappa gave India some hope of extending the contest with a first game win, but Jung Kyung Eun/Chang Ye Na gradually asserted their superiority and clinched the tie for Korea, 18-21 21-12 21-12.

Indonesia were never in danger from the depleted Danish squad in the final sub-group 1C match. Although Kim Astrup and Anders Skaarup Rasmussen punched above their weight in the opening Men’s Doubles against Mohammad Ahsan/Hendra Setiawan, the Indonesians eased through after losing the first game, 21-23 21-16 21-12.

France eased past Brazil 4-1 despite a setback in Women’s Singles. Brice Leverdez set the ball rolling for the French, beating Daniel Paiola in the opening Men’s Singles match, 12-21 21-8 21-16. Although Lohaynny Vicente overcame Delphine Lansac to make it 1-1 for Brazil, the French were just too good in the remaining matches. Australia held off a strong Swiss challenge and emerged narrow winners after an exciting Women’s Doubles contest in the fifth match.

After Mathew Chau/Sawan Serasinghe (Men’s Doubles) helped them recover from a 1-2 deficit, Leanne Choo and Gronya Somerville (above) stepped up to the plate for Australia against Cendrine Hantz/Sabrina Jaquet. Choo and Somerville shot ahead in the final stages for an 18-16 lead, only to see the Swiss level at 18-all. The Australians remained cool under pressure to take the last three points for a 12-21 21-16 21-18 victory.