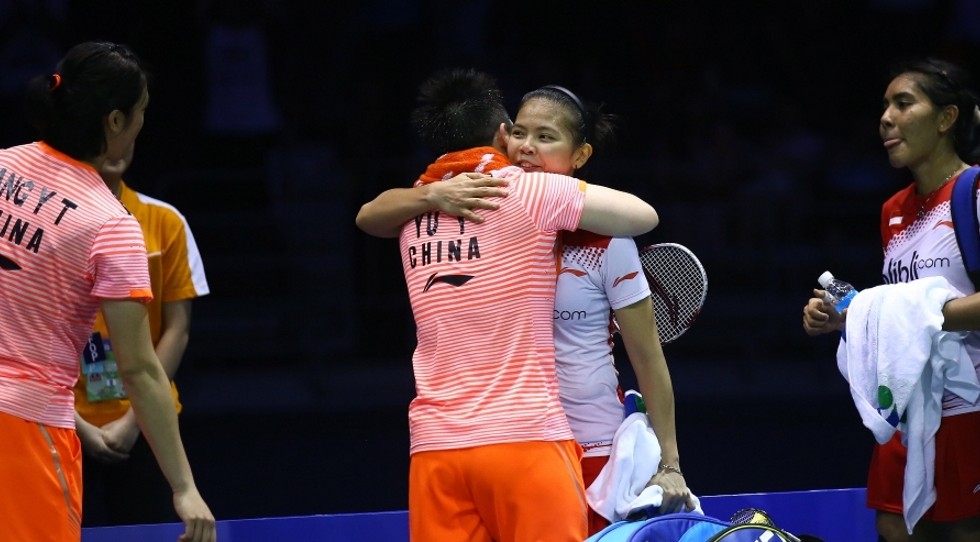 China’s all-round strength proved too hard for Indonesia to crack as the home favourites breezed into the Vivo BWF Sudirman Cup final today.

The defending champions stayed on course for a tenth Sudirman Cup title with the 3-1 semi-final win in Dongguan.

Indonesia raised early hopes of an upset by winning the Men’s Doubles in quick time but the rest of the challenge failed to measure up.

It was the brilliance of Hendra Setiawan that helped Indonesia draw first blood. The opening encounter between Mohammad Ahsan/Setiawan (above) against four-time World champions Cai Yun/Fu Haifeng was dictated by Setiawan’s sublime net skills. In the manner that he has done so often, the deft placements and silken touch at the forecourt enabled his partner Ahsan to unleash his heavy smashes and leave Cai and Fu constantly under fire.

Only briefly in the first game did the Chinese make a match of it. They stayed close until 15-all, but four straight errors left them adrift. They fared worse in the second game. The Indonesians were able to keep the rallies short, relying on deft dabs and flicks, preventing Cai and Fu from working their way back into rhythm. The Chinese challenge crumbled as the match progressed, with Fu in particular committing a flurry of mistakes. Fu blamed the defeat on the inability to find momentum.

“We lost a series of points towards the end of the first game and that affected us. We were passive throughout the match. We could gain only 10 percent of the attack; we were under attack the rest of the time.”

Ahsan stated that they had decided to take the initiative from the start, but not to rush any point.

Indonesia’s lead did not last beyond a few minutes. Bellaetrix Manuputty scored a winner for 5-2 and immediately fell to the floor, clutching her knee. She lasted one more point before retiring with injury.

With teenager Jonatan Christie taking on World champion Chen Long (left) in the Men’s Singles, Indonesia’s chances did not appear too bright. Christie sparkled in patches, but faced with the speedy and powerful Chen, he was unable to maintain his intensity for extended periods. Wild smashes undid his cause, and Chen never lost control during his 21-10 21-15 victory.

Women’s Doubles pair Greysia Polii and Nitya Krishinda Maheswari revived Indonesia’s hopes with some smart tactics and quick reflexes to take the first game over Tang Yuangting and Yu Yang (below). The script changed in the next two games with Tang Yuanting (featured image) imposing herself. Tang’s whippy smash ensured points nearly every time she was given a lift; the Indonesian resistance slowly but surely fell apart under the barrage: 17-21 21-17 21-15. Yu Yang, veteran of many battles, praised her younger partner.

“Tang Yuanting is at her peak, in terms of physical ability, skill and strategy. I want to say ‘thank you’ to her for today’s performance. We haven’t always been partners. In the Sudirman Cup, we played only one match together before the semi-finals. We were unable to co-ordinate in the first game but we found our way back in the second.”