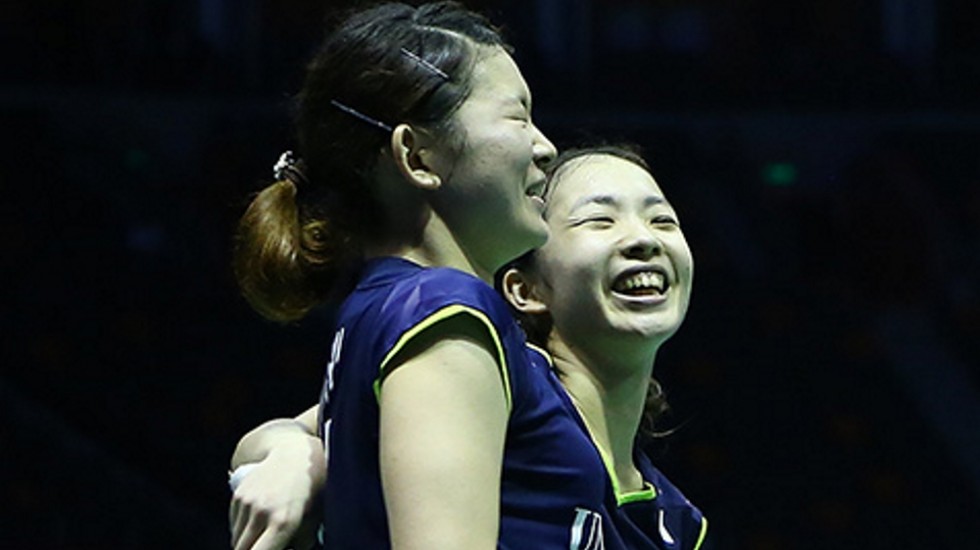 Under-strength Denmark were within a whisker of upsetting title favourites Japan but faltered at the very end in the quarter-finals of the Vivo BWF Sudirman Cup today.

Meanwhile, Indonesia joined Japan in the semi-finals with a relatively easy 3-1 result over Chinese Taipei. Indonesia face defending champions China in the last four while Japan take on Korea.

Denmark proved a feisty opponent to Japan despite not having their best doubles players.

The Danes took it to the fifth match with the upset of the day. After Kento Momota and Nozomi Okuhara clinched the singles to give Japan a 2-1 lead, the scratch Men’s Doubles pair of Mads Pieler Kolding/Kim Astrup blew a hole in Japan’s campaign with their straight games defeat of world No.6 pair Hiroyuki Endo (below)/Kenichi Hayakawa. It was Kolding’s second winning show of the day after partnering Sara Thygesen in the opening Mixed Doubles in which they outplayed Kenta Kazuno/Ayane Kurihara, 21-9 16-21 21-13.

“We did everything we could,” said Kolding (below; left), who revealed that his regular partner Mads Conrad-Petersen was injured.

“Kim and I don’t play as a team – we must have played not more than two games in training. I had to play two matches today but I was fresh.”

The scratch Women’s Doubles pair of Line Kjaersfeldt and Sara Thygesen nearly took the tie away from Japan in the final match. Playing fearlessly against world No.1 pair Misaki Matsutomo/Ayaka Takahashi (featured image), the Danes were 19-18 ahead in the third until the Japanese found a couple of last-gasp winners: 19-21 21-7 21-19. “We were very brave; two of our men were ill and one was injured. These girls haven’t played together; they’re young and inexperienced and yet we were so close.”

Indonesia had it easier than they might have anticipated against Chinese Taipei.

Mohammad Ahsan and Hendra Setiawan were expected to run into a difficult challenge from Lee Sheng Mu and Tsai Chia Hsin. However, the Indonesians completely dominated the script, keeping the rallies short and never allowing Lee and Tsai to get any rhythm. Setiawan expertly controlled the front court; his tight net shots forced his opponents to lift the shuttle, enabling Ahsan to employ his big smashes. The 21-17 21-18 result was their sixth in seven matches against Lee/Tsai; all six being achieved in straight games.

Bellaetrix Manuputty stood little chance against Tai Tzu Ying as the world No.4 waltzed past her 21-17 21-17. With the experienced Hsu Jen Hao taking on youngster Jonatan Christie (left), the odds were in favour of Chinese Taipei going 2-1 ahead.

Christie appeared to flag in the third game; on one particular point, with Hsu out of position, he played it safely back enabling his opponent to recover and go 11-7 ahead.

With the match disappearing from his grasp, Christie went for broke, smashing at every opportunity to reel off nine points in a row to bury Hsu’s challenge.

“I kept pushing myself when I was down; I kept playing at the net and going for the smash,” said Christie.

“I had to play all-out. I’ve lost to him once and I studied the video. This is my first Sudirman Cup; I want to show that Indonesia has a great young player for the future!”

Greysia Polii and Nitya Krishinda Maheswari ensured the tie for Indonesia with a 21-14 21-9 result over Chen Hsieh Pei Chen/Wu Ti Jung. The Indonesians, champions in the first edition of the Sudirman Cup in 1989, meet nine-time champions China tomorrow.

Polii remained optimistic despite the colossal challenge that awaited the team.

“We want to fight and give our best. This is the team we’ve got; we can only work with what we have. This is China’s home venue, their spectators. But the last time, in 2013, we almost beat them. We (Polii and Maheswari) won the Asian Games gold medal after beating China (Tian Qing/Zhao Yunlei in the semi-finals), so we will take confidence from that. Jonatan (Christie) played well; he contributed to our win today. Anything’s possible on court.” Australia staged a stunning turnaround to beat Austria 3-2 after they were 0-2 down.

Iceland beat Israel 3-1 in a Group 4 play-off for third place. Misha Zilberman beat Kari Gunnarsson to make it 1-1 for Israel, but Gunnarsson returned for Men’s Doubles with Atli Johannesson and stopped Zilberman/Ariel Shainsky 21-11 21-19.

In the same group, Nigeria withstood a Kazakhstan fightback to prevail 3-2 after seeing their 2-0 lead evaporate. Dorcas Ajoke Adesokan/Grace Gabriel won the tie for Nigeria over Ilyana Filipchuk/Veronika Sorokina in the fifth match, 21-19 21-14.