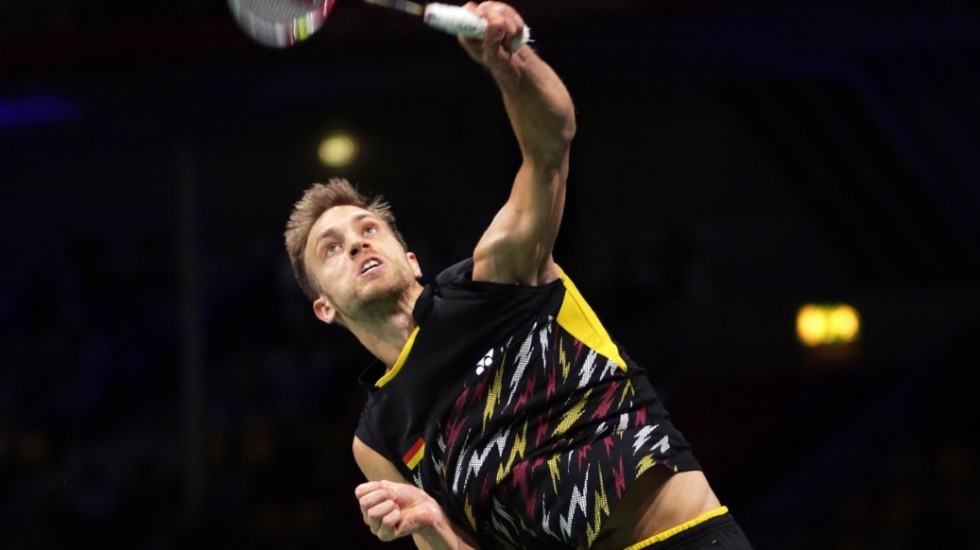 Germany virtually assured themselves of making the quarter-finals by winning a come-from-behind tie against Thailand in the Vivo BWF Sudirman Cup today.

Placed in sub-group 1A with superpower China, both Thailand and Germany needed the win today to harbour any hopes of making the knock-out stage. Thailand had all the early momentum by wrapping up the first two matches – Bodin Issara and Nipitphon Puangpuapech dismantling Michael Fuchs/Peter Kaesbauer 21-15 21-16 (Men’s Doubles) and Ratchanok Intanon easing past Karin Schnaase 21-16 21-4 in the Women’s Singles. Germany’s reliable Mixed Doubles pair Michael Fuchs and Birgit Michels shut the door on Thailand despite losing the second game, 21-12 11-21 21-10. Thailand are now faced with the difficult prospect of upsetting China if they hope to make the quarter-finals.

“It was a close match, very tough,” said Fuchs.

“Before the tie, we thought we had a chance in four matches, except the Women’s Singles. The Men’s Doubles went away in straight games; that was a blow for us. But then Marc (Zwiebler) was great today, he kept his nerve in a crucial match. And then the Women’s Doubles was great; we were happy to finish it off.” Birgit Michels, who had contemplated retirement last year, but found herself back on court, admitted that the lure of the Olympics was just too strong.

“We had so much success last year. Playing the BWF Destination Dubai World Superseries Finals was a big experience for us. I thought about my retirement again over Christmas and New Year. I’m 30 now, and this is my last chance to play the Olympics once again, having played in Beijing and London. I was out half the year; I’m in better shape now. Rio will be my third Olympics. That’s our goal now.”

Ozge Bayrak (above; right) did the star turn for Turkey as they beat South Africa in a seesawing tie. Turkey had to recover from deficit twice. South Africa’s Andries Malan/Willem Viljoen gave them the lead in Men’s Doubles, but Turkey pulled it back through Ozge Bayrak/Neslihan Yigit in Women’s Doubles.

The Men’s Singles between South Africa’s Jacob Maliekal (right) and Ramazan Ozturk was a riveting affair that finally went Maliekal’s way after 53 minutes, 21-15 18-21 21-18.

Turkey once again fought level through Ebru Tunali in Women’s Singles. Despite his long singles match, Ramazan Ozturk (above; left) returned for Mixed Doubles with Ozge Bayrak and the Turkish pair powered past Willem Viljoen/Michelle Butler-Emmett, 21-3 21-16.

In the same sub-group, Czech Republic had few problems in dismantling the challenge of Austria. Veteran Petr Koukal set the ball rolling for the Czechs with a 21-18 21-17 win over Matthais Almer. Although Austria pulled one back in the Women’s Singles through Elisabeth Baldauf (below), the Czechs had too much depth. Jan Frohlich/Ludik Milan consolidated the lead in Men’s Doubles, and the tie was won in the next match when Alzbeta Basova/Zuzana Pavelkova proved too strong for Janine Lais/Nathalie Ziesig (Women’s Doubles). Chinese Taipei had it fairly easy over Russia, although they were a match down after the opener. Vitalij Durkin/Nina Vislova gave the Russians the lead in Mixed Doubles, beating Chen Hung Ling/Wu Ti Jung 21-9 21-19. Iceland shrugged off a 1-2 deficit to turn the tables on Nigeria. After Grace Gabriel had given the Nigerians a 2-1 lead beating Margret Johannsdottir (Women’s Singles), Iceland’s Men’s Doubles pair of Kari Gunnarsson and Atli Johannesson came to their rescue. Iceland’s close first game win saw the Nigerian pair of Enejoh Abah (above)/Victor Makanju crumbling in the second. Rakel Johannsdottir/Margret Johanssdottir then carved out a 21-13 21-16 victory in the Women’s Doubles to put the tie past Nigeria.