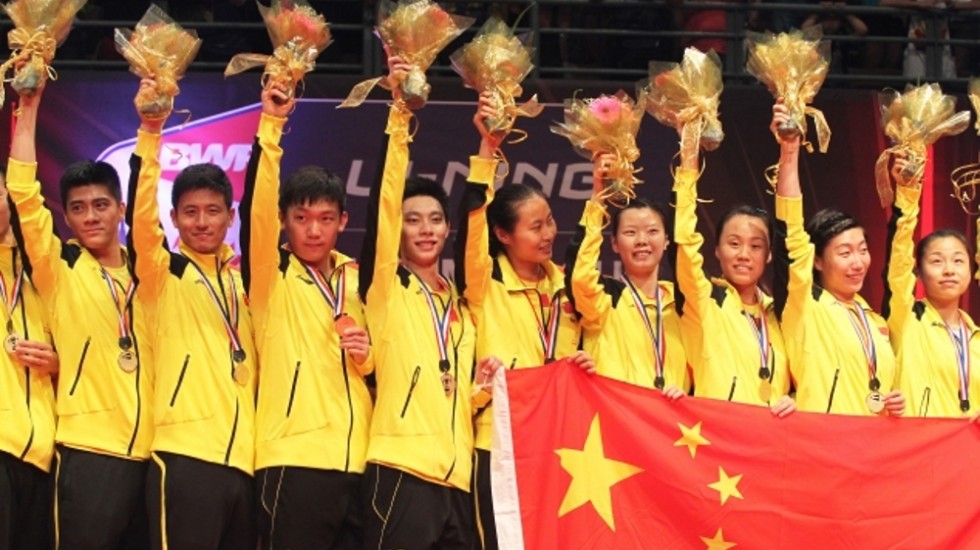 China have an opportunity to make it a perfect ten on home soil as they defend the Vivo BWF Sudirman Cup in Dongguan.

The badminton superpower, who have won nine titles since the Sudirman Cup (World Mixed Team Championships) started in 1989, take on Germany in the opening encounter of the 10-17 May tournament. China have an enviable record: since winning their first title in 1995, they have been thwarted only once in the biennial event – by Korea in 2005. In the 2013 edition, China comfortably beat Korea 3-0 in the final.

The defending champions (above: celebrating at Sudirman Cup 2013) are in sub-group 1A with Germany and Thailand. The top 12 teams in the competition are in Group 1 which is split into four sub-groups. Japan – boasting members of the Thomas Cup-winning squad – are in sub-group 1B with Chinese Taipei and Russia; 1C consists of Denmark, Indonesia and England, while 1D has Korea, India and Malaysia. Three-time champions Korea (left: Chang Ye Na and Kim Ha Na), showcasing a formidable all-round team, begin against Malaysia in the evening session (7 pm local time) of the opening day, while European champions Denmark face off versus fellow European power, England. The fast-improving Indian squad will be up against Malaysia on the second evening, while Indonesia – winners of the first Sudirman Cup in 1989 and who gave China a fright in the 2013 quarter-finals – will be challenged by England.

The top two teams from each sub-group of Group 1 will qualify for the quarter-finals, which have been scheduled for the evening session of 14 May and the afternoon session of 15 May. The semi-finals will be held over two sessions on 16 May. The final will be held on Sunday, 17 May, at 2pm local time.

There will be opening-day action in some other groups also. Singapore take on Spain and Netherlands face Canada (below: Michelle Li, Kevin Li and Rachel Honderich) in sub-group 2A in the first session. Groups 2, 3 and 4 have been split into two sub-groups each. The countries in these divisions will fight for overall placings and not for the trophy. The round-robin matches in each sub-group will be followed by play-offs between the sub-group top-finishers for placings. On 15 May, the winners of sub-groups 2A and 2B will clash for 13th place while 3A and 3B winners vie for 21st place. First-place finishers in 4A and 4B will battle for 29th position.