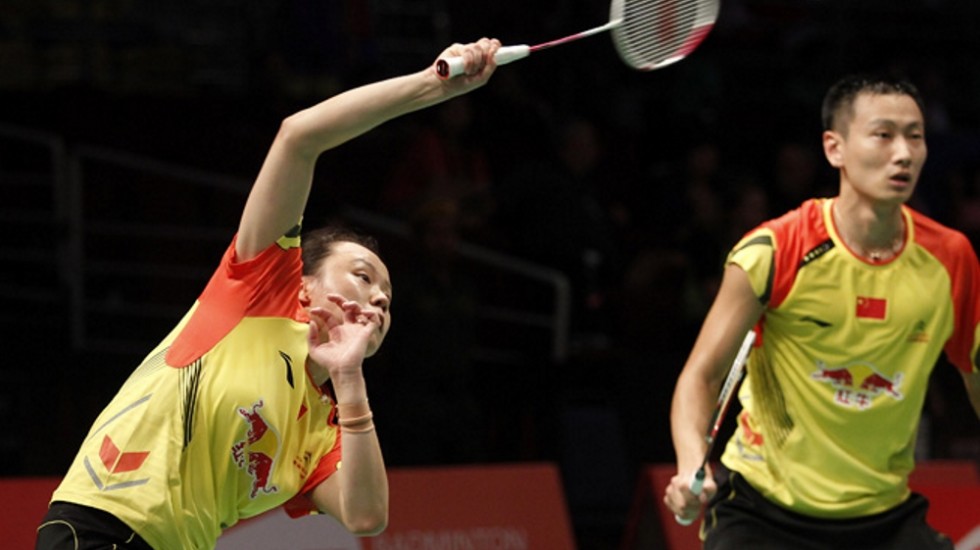 For the third occasion, the Chinese will face Korea for the title. Korea and China have played two finals in the last ten years – in 2003 and 2009 – with Korea winning the first and China the other.

This evening, China suffered one loss but they had enough firepower to close out the contest by the fourth match. The lone ldefeat came when they were 2-0 up, with Cai Yun and Fu Haifeng taking on Mathias Boe/Carsten Mogensen (below; celebrating) in Men’s Doubles.

The Chinese world and Olympic champions haven’t been seen frequently on the world circuit since winning at London 2012 and the rustiness was glaring against the world No. 1 pair. Boe and Mogensen dominated in attack, with steep smashes breaching China’s defence time and again en route to a 21-16 21-17 outcome.

“They played really well and they controlled the match. They were too fast and too strong for us today,” conceded Pedersen.

China consolidated their start when world No. 2 Chen Long – who has never lost a game in four matches against Denmark’s Jan O Jorgensen – closed out his contest 21-16 21-16. Jorgensen managed a good account of himself in the second game, coming close at 16-18, but a smash fired wide earned Chen Long victory in 49 minutes.

Women’s Singles world No. 1 Li Xuerui (left) took the court against Line Kjaersfeldt in the fourth match. The Dane matched Li early in the match, up to 10-all, but thereafter Li shot ahead and was never threatened. The second game was totally one-sided as Li wrapped up the match 21-13 21-9 to formalise the proceedings.

China’s head coach, Li Yongbo, kept his cards close to his chest, not disclosing much about the team line-up for the final. However, he noted the defending Sudirman Cup (centre above) champions have many combinations from which to choose and that they are not taking their opponents lightly.

“Korea are strong and serious about the final and we are ready to fight them to the end,” he said.