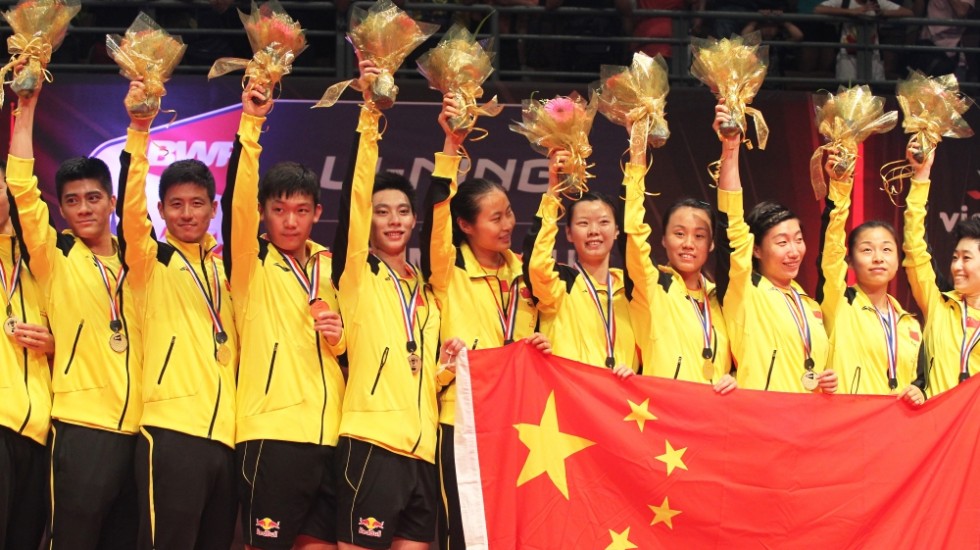 China strode to a ninth title in the Li-Ning BWF Sudirman Cup today – boasting an awesome array of stars who obliterated Korea’s ambitions 3-0 in the final;

The crushing defeat ensured the defending champions held on to the coveted World Mixed Team Championship for a fifth successive occasion; having last relinquished their grip on the biennial tournament in 2003 when ironically they were beaten by Korea. That has been China’s sole loss in a final in 18 years. Sadly for Korea, there was no repeat of the heroics which saw them victorious a decade ago – they didn’t even seriously threaten to win a single game in the three matches. The dominant display means China have won the last five Sudirman Cup finals without dropping a match in the finals.

“The players and staff deserve this victory. They have worked hard and sacrificed a lot…and we will keep training and working to improve and win more titles. We take all opposition seriously,” said China’s head coach, Li Yongbo, following the presentation ceremony at Putra Stadium.

The emphatic result was ignited by Mixed Doubles pair, Xu Chen and Ma Jin (right); clearly eager to compensate for losing to Indonesia in the quarter-finals. Having sat out the semi-finals, they grabbed the chance to make amends and bulldozed Asian champions, Ko Sung Hyun and Kim Ha Na, 21-13 21-15 with an outstanding performance – Xu hammering monster smashes from the back, while Ma was razor sharp at net.

It knocked the heart and soul out of Korea whose hopes hinged on strong returns in the doubles events. It didn’t help that Kim – who was to feature in both doubles (if it got to Women’s Doubles) – looked nervous and committed a slew of unforced errors to worsen their predicament.

China’s determination to board their return flight with the trophy was underlined by Xu’s 286-kmph smash that brought up match point. It was duly converted.

“This was an emotional victory, especially after the loss to Indonesia. It was important to get the first point for China,” noted Xu Chen.

Lee Dong Keun may be a diamond in the rough but the Korean youngster was not up to the formidable task of withstanding world No. 2 Chen Long in Men’s Singles. The chasm in class was too great a leap for him. The Korean impressed in patches with some unusual shots catching Chen by surprise. However, the Chinese was able to push the pace and corner Lee at will, winning 21-15 21-10.

The Men’s Doubles has been Korea’s long-time forte and, with Lee Yong Dae and Ko Sung Hyun, the challengers thought they might take at least a point off China . In a fitting nod to the future, Li Yongbo gave All England and India Open champions Qiu Zihan/Liu Xiaolong (top left) the priceless opportunity to clinch the winning point for their country.

Clearly the successors to their great seniors Cai Yun and Fu Haifeng, they did not disappoint – blanking their rivals 21-19 21-17.

Mission accomplished: the Sudirman Cup in the bag!