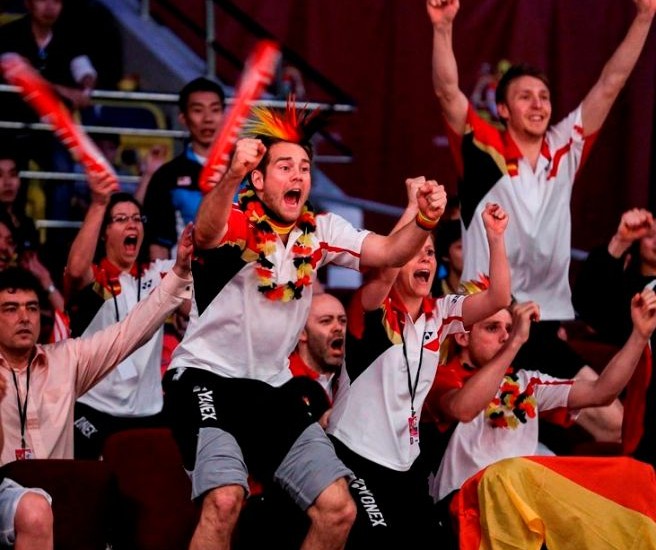 The result secured second place in the group and a quarter-finals berth for the European champions as both teams had previously lost to Chinese Taipei. Malaysia therefore finished in the cellar position, despite the best efforts of veteran Lee Chong Wei over the course of the campaign. In other matches, Korea whitewashed Thailand 5-0 (Level 1 Group B); Switzerland did likewise against Lithuania 5-0; Vietnam beat Australia (left; Mixed Doubles) 4-1 (both Level 3 Group B), and Scotland were 4-1 winners over USA (Level 2 Group A).

Malaysia suffered a setback in their opening match (Mixed Doubles), when highly-touted Chan Peng Soon/Goh Liu Ying (below) went down in three games to Michael Fuchs/Birgit Michels. The match was evenly contested with the Germans coming through in 68 minutes, 21-17 18-21 21-17. Women’s Singles has been a problem for Malaysia in recent times and it was yet again tonight. Tee Jing Yi’s aspirations were expertly dismantled by Olga Konon 21-12 21-14. It was therefore down to the final match – Women’s Doubles. Local duo Woon Khe Wei/Vivian Hoo fought back courageously after losing the first game, but the pressure to deliver plus the relentless attack of Birgit Michels and Johanna Golsizewski wore them down; Germany (below) clinching the tie, 21-16 16-21 21-18.

Sung Ji Hyun tuned up for the quarter-finals, strolling to 21-11 21-7 in Women’s Singles over Nichaon Jindapon. Team-mates Jung Kyung Eun/Kim Ha Na continued their good form with a 21-16 17-21 21-11 result over Duanganong Aroonkesorn/Kunchala Voravichitchaikul in Women’s Doubles.