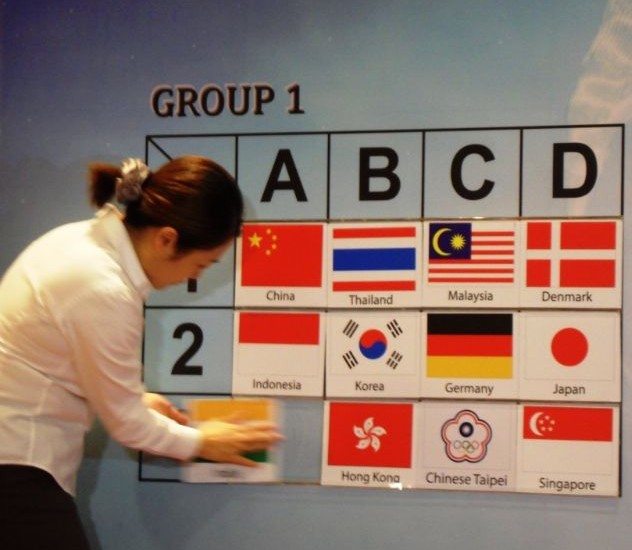 Hosts Malaysia were in optimistic spirits after this morning’s Li Ning BWF Sudirman Cup 2013 draw, pitting them against Germany and Chinese Taipei in the opening round-robin stage of competition. Championship to be held at Putra Indoor Stadium in May.

The tournament’s joint No. 3 seeds were placed in Group 1C and the European champions and Chinese Taipei subsequently joined them as the draw progressed. Title holders and top seeds China – bidding for an unprecedented ninth victory in the biennial event – are in Group 1A along with Indonesia and India.

Group 1B features Thailand (also joint No. 3 seeds), Korea and Hong Kong while Group 1D has No. 2 seeds Denmark, Japan and Singapore.

“This draw is very good for Malaysia and we will be looking to get into the quarter-finals,” said Malaysia’s Head Singles Coach, Rashid Sidek. His colleague and Head Doubles Coach, Tan Kim Her, agreed and noted it will be important to do well in their Doubles matches to ensure they advance from the group phase.

Mixed Doubles players, Goh Liu Ying and Chan Peng Soon, were also smiling at the outcome of the draw as was Men’s Singles specialist, Liew Daren. The trio said playing in front home fans should be a help rather than a hindrance.

“We don’t think there will be pressure. There should be more support for us,” reasoned Goh.

Meanwhile, China’s Head Coach Li Yongbo reacted to the draw in nonchalant fashion, stating: “It does not matter who we play. We will try our best to defend our title.”

In Group 2A, Russia, USA, Sweden and Scotland will do battle while the Netherlands, France, Canada and Austria will fight for honours in Group 2B.

Group 4 only has three teams South Africa, Philippines and Kazakhstan.

A total of 31 teams will compete in this year’s tournament.

N.B. Countries listed according to outcome of the draw.