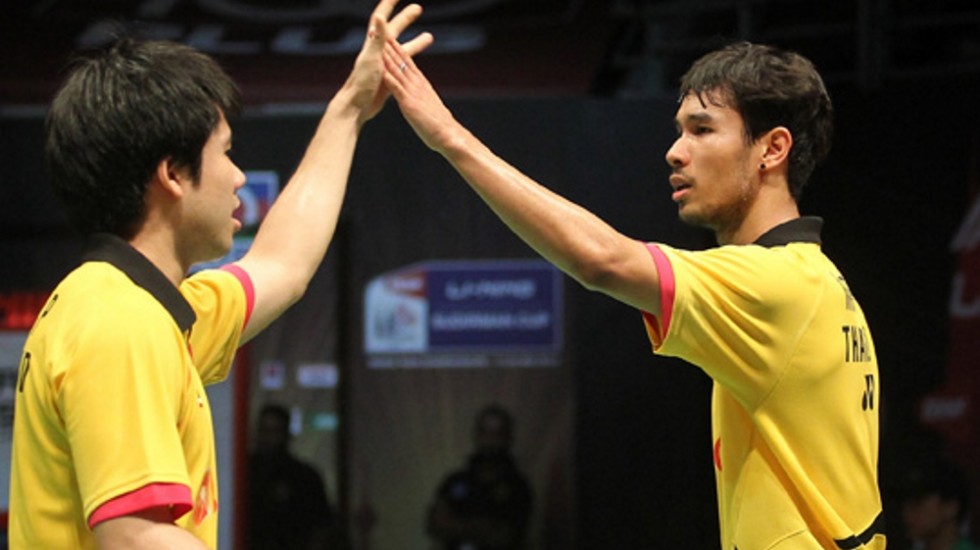 Thailand scripted a stunning upset of Japan in the quarter-finals of the Li-Ning BWF Sudirman Cup tonight, winning comfortably 3-1. They were joined in the semi-finals by Denmark (left; Jan Jorgensen), who overcame Chinese Taipei 3-0 with little trouble. In Level 3 Group B, Australia beat Kazakhstan 5-0 to finish second in the group, while Vietnam beat Switzerland 3-2 to top the group with four wins in four matches. Canada beat Austria 4-1 to finish third out of four teams in Level 2 Group B.

Thailand struggled to qualify for the quarter-finals, having survived a close contest against Hong Kong in their Level 1 Group B encounter. Against a strong Japanese squad, not many gave Thailand a chance, but a combination of youth and experience conjured up the unpredictable result.

Veteran Mixed Doubles pair Sudket Prapakamol/Saralee Thoungthongkam provided the impetus, defeating scratch combination Hirokatsu Hashimoto/Miyuki Maeda 21-19 21-9. Japan levelled thanks to the in-form Kenichi Tago, who recently made the final of the India Open. Tago saved five game points in the first game to surge to a 22-20 21-18 win over Tanongsak Saensomboonsuk in Men’s Singles. World No. 4 Kenichi Hayakawa/Hiroyuki Endo were favourites going into the Men’s Doubles against the new pair of Maneepong Jongjit/Nipitphon Puangpuapech (featured image), and even had a chance to clinch the first game at 20-15. However, the Thais saved five game points, and survived a fierce challenge from the Japanese to edge through at 27-25. Blossoming in confidence, they seized the second game in easier fashion, 21-16.

Japan fielded the upcoming Sayaka Takahashi against India Open winner Ratchanok Intanon in Women’s Singles. The young Japanese gave a good account of herself, taking the second game 21-9. She even had the advantage at 19-17 in the third game, but Intanon (right) held her nerve to claim four straight points and ensure Thailand’s progress to the semi-finals.

Thailand take on Korea on Saturday, while Denmark play China.