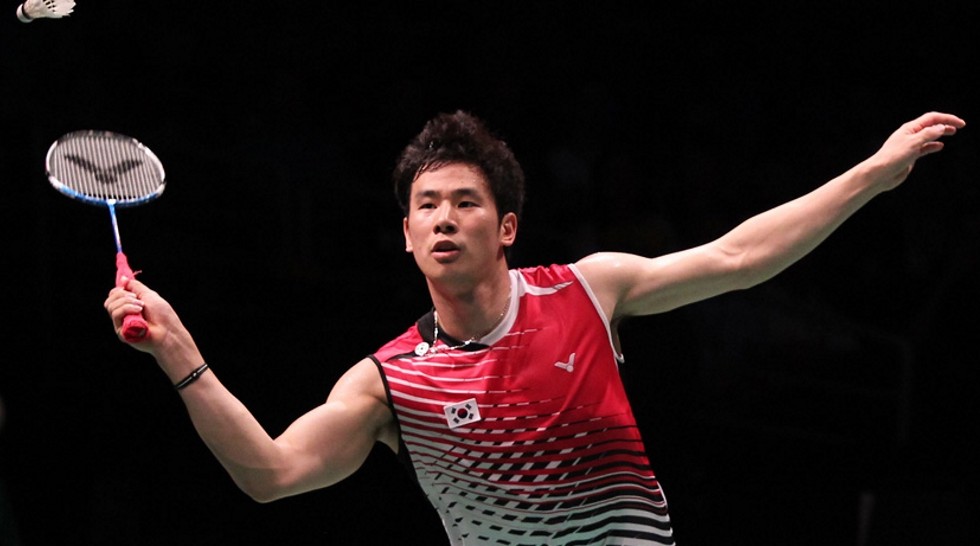 Korea moved to within a victory of replicating their 2003 triumph by reaching the final of the Li-Ning BWF Sudirman Cup this afternoon.

Led by iron man Ko Sung Hyun (featured image) – who successfully played Mixed and Men’s Doubles with barely a breather in between, Korea – the only non-Chinese nation to win the Sudirman Cup since 1995 – scored a comprehensive 3-1 win over Thailand in the semi-finals at Putra Stadium. The only reverse which the Koreans suffered was in the second match (Men’s Singles), when Thai veteran Boonsak Ponsana (below) dismissed youngster Lee Dong Keun 21-9 21-12 to raise prospects of a fightback. Ponsana took just half hour to decimate his younger opponent.

Earlier, the Thai veteran Mixed Doubles pair of Sudket Prapakamol/Saralee Thoungthongkam, who had inspired Thailand’s progress to the semi-finals by winning their first match against Japan in the quarter-finals, could not repeat their feat against Korea. The match was tightly fought, with the Thais staying abreast of the Koreans right through, but Ko Sung Hyun and Kim Ha Na (right) nosed ahead in the final stretch of both games, taking the match 21-18 21-19.

Although Ponsana swiftly made it 1-1 for Thailand, Korea’s world No. 2 Men’s Doubles pair Ko Sung Hyun/Lee Yong Dae asserted their dominance over Maneepong Jongjit/Nipitphon Puangpuapech 21-12 21-11 in just 34 minutes. The Koreans led from early in the first game and never relaxed their grip on the match.

“Playing two matches with about 45 minutes in between is not a problem. My fitness is fine considering our level of practice. We are prepared to put on a really good show tomorrow,” said Ko.

The Women’s Singles was on next, and Thailand’s Ratchanok Intanon had a formidable task, for she trailed Sung Ji Hyun 2-5 in their career head-to-head record. Still, since Intanon had won the India Open Superseries recently, form favoured her. The Thai however came up short when it mattered. From 11-all in the first game, Sung Ji Hyun gradually asserted her dominance, taking the game 21-17. The pattern was repeated in the second game, with the Korean shooting ahead from 13-all to clinch the match and tie for Korea, 21-17 21-14.

“We’ve played many times and I know how Ratchanok plays. I just wanted to enjoy the match and win for Korea,” said a relaxed Sung.