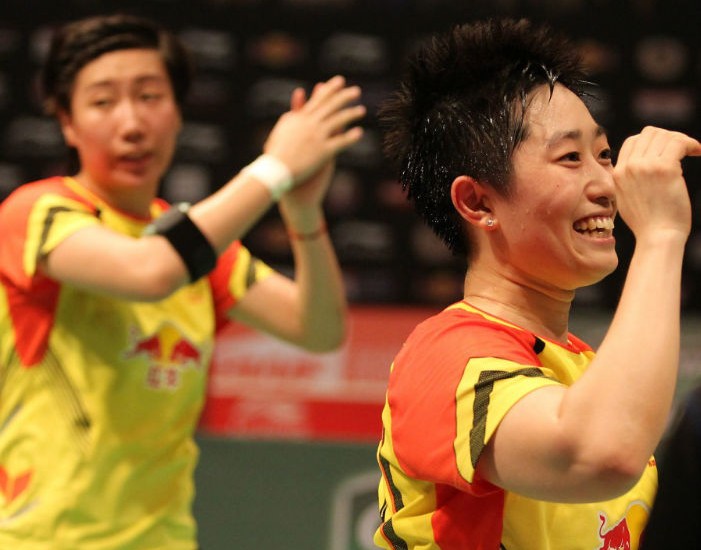 China’s women rose to the occasion this afternoon, delivering a quarter-final victory in the Li-Ning BWF Sudirman Cup that at one stage looked in jeopardy against a

The 3-2 scoreline – only secured in the fifth match and thanks to the unstoppable combination of Yu Yang and Wang Xiaoli (BWF home page) – was a wake-up call for the defending champions who were previously unbeaten in this year’s tournament.

Trailing Indonesia 1-2 in the overall tie – having succumbed in Mixed and Men’s Doubles – the Chinese were spared further blushes by the most dependable of their squad – Olympic gold medallist Li Xuerui (Women’s Singles) and world champions Yu/Wang (Women’s Doubles). “I am relieved that China pulled through but I was not worried at 1-2 down because I know we are strongest in Women’s Singles and Women’s Doubles.

“Both teams performed their best, very well. Indonesia played better than I expected. Indonesia badminton has a bright future with these young players. It’s been a long time since China has been in such difficulty,” said China’s head coach, Li Yongbo (left, at left; being congratulated by Indonesia coach Rexy Mainaky).

The other Level 1 quarter-final was far from dramatic as Korea flexed their muscle, brushing aside a battling Germany 3-0 in quick time. In Level 3 Group A, the Philippines beat Turkey 3-2, while Ukraine beat New Zealand 5-0. The Netherlands held off France 4-1 in Level 2 Group B.

The China-Indonesia clash garnered all the attention of the early session. The Chinese had blanked Indonesia 5-0 in their Group A tie earlier in the week, but Indonesia fielded a different squad today. All England champions Tontowi Ahmad/Liliyana Natsir (right below) took on Xu Chen/Ma Jin first in Mixed Doubles and, despite trailing 2-6 in their career record, toppled the Chinese 21-18 14-21 21-16.

“I blame myself for the loss. I didn’t take the initiative to control the match in the third game,” noted a disappointed Xu Chen in defeat.

As expected, Chen Long equalised for China in Men’s Singles against Tommy Sugiarto (21-11 21-15). Olympic champions Cai Yun/Fu Haifeng were on next for China in Men’s Doubles, and Indonesia fielded their highest-ranked pair Angga Pratama/Rian Agung Saputro. The Indonesians raised their play brilliantly, especially in the third game. Saputro in particular was exceptional, holding fort at net and frequently creating openings and killing high shuttles. Pratama/Saputro stunned the Olympic champions 19-21 21-18 21-15 and put Indonesia within one match of the semi-finals.

However, the best was yet to come for China as Li Xuerui dismissed Lindaweni Fanetri with a performance that outclassed her opponent on every count – her speed and attacking variations proving too much for her rival. The result: 21-16 21-13 to China.

Natsir returned with Nitya Krishinda Maheswari to try and propel her country to an unlikely triumph. The Indonesians stayed close to Yu/Wang in the second game, but the grit and well-honed skills of the accomplished Chinese prevailed – 21-12 21-19.

“We were always confident we could get the winning point for China. This is normal for us,” said a beaming Yu Yang.

In their press conference, Indonesia’s players and coaching staff said they were proud of how they performed and the battle they gave China. This result, they noted, gives them a lot of optimism for the future, especially with their rising stars.